Recycling is starting to cost more than it earns…creating a business case crisis for the recycling industry especially processing plants as the value of recyclables go down because of various factors, oil prices amongst others.

I just read about this in an article Earth 911, The Other Side of Recycling and been in conversations about the increase in incineration of plastics. I had a chat with another lady the other day about the over full general waste bin. She mentioned that it is like yeah – that is done now, like it is yesterday’s news.. recycling. People aren’t doing it anymore. Like it was a “Project” that has now ended. So weird – but so true – awareness – does it lead to change? Do we have the support in place to facilitate actions from a changed mindset? Does our world reflect these high aspirations?

I think this is very much a place where the whole “climate movement” is finding itself now, we were very much about awareness – and that is the easy part. Now about implementing and actually changing systems, and putting processes in place… well this is where the real work begins, but of course this can’t happen if we don’t have a lot of affected climate champions behind it.

Recycling for small businesses in Bristol also provide a little hurdle for following a path of least resistance.  Basically you have to pay for each bin you need to be emptied. So if you recycle you pay for at least double or up to 4 times what you would pay for a general waste bin collection. So where is the incentive? Most people I know take the recyclables back with them to their houses, but that only covers a small amount of waste produced. What do we do?

Immediately LitterARTI style.. yeah ! Lets do some art. lets show people what gets wasted, and then work out the value of the materials and visually inspire the change. But I feel a little dismayed at this approach, who am I doing the art for? the Council? The small businesses who already feel bad for doing it? To fire up a bunch of people to feel powerless and aware of being stuck in a system. I am also part of this small business group and it really is tricky to get around this. However if this was the only option – could they not level the cost of it across businesses and then it does not have to tap my ethical energy? I can just get on with things.  Same to be said about packaging, How long do we need to tap ethical energy around our bins, because policies and systems are stopping us from doing the right thing?

But that I guess can be said about so much old system thinking which we are living in and trying to recover from. Trying to reclaim conscious responsibility. Trying to grow up dammit! Perhaps these are exactly the things which will score us our browny points before reincarnating back again to deal with the same things. I once had an idea that perhaps the whole of life existence have always had us in little groups or families of souls protecting the earth – so if I’m concerned with “waste” now as an artist / community builder / solution finder, I most definitely was a little dung beetle in a previous life, so perhaps I can look forward to being one of those amazing meal worms who eat polystyrene and poo out compost in my next life!

Last night I heard on the news the big reform in jails by Mister Cameron, and these ideas are very radical! Cool man. But as so clearly stated, you need to manage the system so as to support people with supportive communities before they end up in jail and then if they ended up in jail – when they have to reintegrate with life…as to not end up back in jail. Are the jails really the problems? They provide safety, homes and security and community to many of its residents and life outside is a pretty scary place where you are the outcast. I spoke to a guy, an ex-convict recently when he told me about his frustrations in getting support to do his CV. So what do you want me to write on my CV? I was in rehabilitation since I was a child – been in this institution then there and then in jail.  This support – which ticked a box, it is great, was obviously missing the mark dramatically. As for the reform, I absolutely agree this is the place where this employability issue can be tackled – however the support need to extend beyond the metal bars. Life is a pretty tough place for everyone and without support it can be ruthless.

So back on Recycling, I know this is a long shot.  But. If we look at the materials before they turn into waste… and ensure they are created with the intention to be re – processed, re-produced after their initial function .ie packaging has expired. So even before the lifecycle even begins you already have ingrained in its DNA the highest potential in its material – the vision or blueprint of what it could become?

Julie’s Bicycle – looking and supporting sustainability in the arts sector.

LitterARTI had another event taking place with the Easton Energy Group: Beat The Cold. A Local Community Event bringing local incentives together under one roof at the Easton Community Centre. Groups included were: Easton Energy, Foodcycle, and Demand Energy Equality with their DIY solar panel workshops.

Two artists, Annali Alletha and Phipholle were there doing creative recycling workshops exploring household waste. Plastic bottles and yogurt pots. The fun to work with waste materials, is that it allows for experimentation, no need being precious about materials here! It was quite funny actually collecting the plastic bottles from the parks and on the cycle path, as the coloured plastics are becoming quite a commodity! 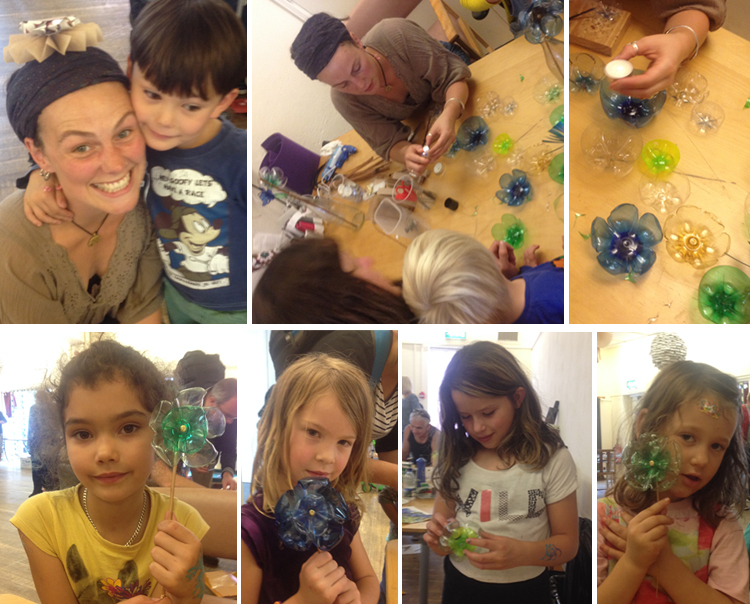